Anyone who knows me knows of my hate-hate relationship with running.  I have started running in the past year, and have decided that it is the most ridiculous activity known to man.  You can’t score goals, you can’t look cool, and you will NEVER make it to Sportcenter (Usain Bolt excluded….I mean….he IS Usain Bolt).

The main reason I hate running is because I suck at it.  I’m strong, but my aerobic capacity is lousy.  I wish I was a bird.  If I was a bird, my trachea (windpipe) would be 2.7 times as large, reducing air resistance.  My rate of breathing would be about 1/3 of what it is currently, and I would take much bigger breaths.  This is the first part of the system that makes the bird respiratory system much more efficient at gas exchange than mammals (especially this particular mammal). 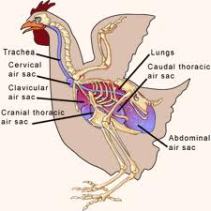 Location of Air Sacs in a hen

Chickens also have structures called air sacs.  The way to think of them are a bit like bagpipes…..they act as reservoirs for air so that there is constantly fresh air passing through the hens lungs.  A bird’s respiratory cycle is much more complicated than ours….we inhale into a big, complicated balloon, pause, and then push the air out.  As the air sits in the tiny air sacs (called alveoli), oxygen diffuses into the blood, and CO2 diffuses out.   Our alveoli are like a bunch of grapes….blind ended sacs that expand and contract as air comes in and out.  During the pause between breaths, the oxygen concentrations of the gasses change, and diffusion becomes slower. In hens, it goes like this….INHALE – air goes into the lungs and the abdominal air sacs.  EXHALE – air leaves the cranial, clavicular and cervical air sacs.  PAUSE – air goes from lungs to front air sacs while air is travelling from abdominal air sacs to the lungs.  Repeat as necessary.The result of these airbags is that there is a constant, one way flow through the lungs, and every part of the lung is constantly filled with fresh, fully oxygenated air.  Chickens have no alveoli…they have a network of tiny tubes where the air never stops flowing.

Diagram of airflow….not simple, but effecive

Hens have other adaptations too.  Birds have hollow bones, and the front air sacs communicate with the wing bones and the clavicles.  Thus, chickens even use their bones to breathe!  At the microscopic level, the point at which the oxygen enters the blood (and CO2 leaves it) is different too.  Cross current exchange where blood travels at 90 degrees to the airflow in the tiny lung tubes….makes for much more efficient exchange because the same air crosses blood vessels several times, instead of just once as in us mammals.  Also, the thickness of the tissues between the blood and the air is less than half that in mammals of similar sizes.Chickens have no diaphragm, which is the muscle we use to expand our chest cavity downwards.  This has major implications if you are handling chickens, especially small ones.  Their keel bone (Breast bone) MUST be able to move, or they can’t inhale.  Holding or wrapping a chicken  too tightly will stop her from breathing.  This is really important when children are around the hens, since a hug that would work for Fido will not work for chickens.So, in summary…birds breathe slower, deeper and more efficiently.  They have one way flow of air through their lungs through the adaptation of air sacs that act as bellows to constantly supply fresh air to the blood, even when the hen is not inhaling.This is why birds have such an efficient respiratory system, and why aerobic exercise is so much easier for them.When I am about 2 miles into a run, I really hate chickens. Mike the Chicken Vet